Theo Clarke, MP for Stafford, Article in The Times, Britain should lead the battle to save the oceans 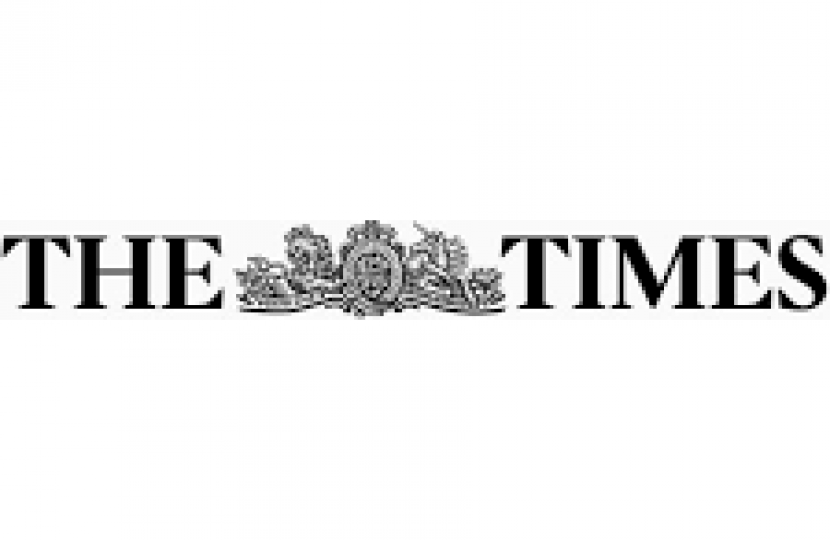 To view the article in The Times please click here.

Please see the full text below.

Britain should lead the battle to save the oceans

"During my maiden speech in the House of Commons last month, I emphasised that, as Britain leaves the European Union, the government should remain committed to expanding our global horizons and reinforcing our national mission as a force for good in the world. One issue of mounting concern to the British public is the environment, and I am proud that the UK is leading the way on global action to address climate change.

In November we are scheduled to host the United Nations Climate Change Conference (COP26) in Glasgow. Leading by example with our strong record of reducing our emissions at home, we will encourage other countries to submit ambitious climate action plans, in order to honour the goals in the Paris Agreement. This is a critical opportunity to avert dangerous levels of climate change and, in turn, to try to avoid devastating consequences.

Our changing climate is closely linked to the declining health of our oceans. This is an issue close to my heart. Oceans play a vital climatic role by absorbing carbon. As carbon dioxide levels rise in the earth’s atmosphere, our oceans are warming and becoming more acidic, which poses a threat to delicate ecosystems such as coral reefs that support precious marine species.

Rising sea levels and more extreme weather events linked to climate change may drive millions from their homes by the end of the century. The government recognises this risk and, through its Blue Forests Programme, is helping other countries adapt and mitigate the negative effects of climate change.

UK Aid’s initiative to protect 20,000 hectares of mangrove forest has been rolled out in Africa, Asia, Latin America and the Caribbean. This programme also helps countries protect their marine environments from other threats such as plastic pollution, overfishing and habitat loss. Unchecked industrial fishing can have a detrimental impact on fish and shark populations, while plastic pollution is contaminating our oceans, choking whales, turtles and other marine species.

I have seen first-hand the scale of the challenge of tackling plastic pollution both at home and abroad. When I visited Kissy Dump in Sierra Leone, local campaigners spoke about the challenges of trying to build waste management and recycling systems in developing countries. I saw rubbish being burnt in the street and thrown into the river or sea, and heard stories about flooding and health problems.

In 2018 the government pledged £66.4 million to boost global research and help countries across the Commonwealth stop plastic waste from entering the oceans. Britain has played a world-leading role in tackling plastic pollution, but we must not rest on our laurels. It is vital that we keep pressing to combat this problem across the globe.

Last year, as head of the Coalition for Global Prosperity, I hosted Sir David Attenborough at an event where we explored how Britain can take a leading role in the fight against plastic pollution. Sir David cited the harrowing statistic that of the 400 million tonnes of plastic produced globally each year, 10 million tonnes ends up in our oceans.

Plastic pollution has been found in every corner of the planet. In our oceans, marine life such as seabirds, dolphins, whales and turtles become entangled in plastic. Last month a Greenpeace report, Turtles Under Threat, estimated that more than 50 per cent of all sea turtles may have ingested pieces of plastic, mistaking it for food. Here in the UK we have taken steps to ban certain microplastics, but more needs to be done to end our reliance on single-use plastics and shift towards reusable, refillable and packaging-free solutions.

It could not be clearer that our oceans face an increasing range of threats. Bold measures are needed across the world to place our most precious marine ecosystems off-limits to human exploitation, through marine sanctuaries, to allow them to recover and thrive. I am delighted by the prime minister’s recent announcement of a significant expansion of the Blue Belt of protected areas around important marine habitats in the British Isles and around our overseas territories. The government has also pushed for 30 per cent of the world’s oceans to be safeguarded by 2030.

But in order for this “30by30” vision to be delivered, greater political leadership is urgently required at the UN level. A strong Global Ocean Treaty needs to be established to provide a framework for countries to come together and designate and enforce ocean sanctuaries in international waters. At present less than 10 per cent of the global oceans are properly protected, and the latest draft treaty leaves many critical decisions still up for negotiation.

This is an opportunity for global Britain to step up and lead. The UK has forged the way in establishing a Global Ocean Alliance of countries that back 30by30. Our strong diplomatic network must encourage more countries to join, and then harness the power of the alliance to push for the strongest possible treaty.

Lord Goldsmith of Richmond, the environment minister, has pledged “to press for an ambitious global network of marine protected areas which will be critically important in reversing the loss of biodiversity and mitigating the impacts of climate change”. At the final round of UN negotiations in New York, the UK has a chance to spur collective action and unlock this government’s ambition.

The 2020s will be critical for action to protect our oceans and climate. We must be bold and unrelenting in pushing for the strongest possible outcomes in the global negotiations ahead. Britain is in the perfect position to leave a positive mark on the world by protecting the environment for future generations."

Theo Clarke is the Conservative MP for Stafford

Theo Clarke MP for Stafford was delighted to host a Westminster Hall Debate in Parliament on ‘Back British Farming Day and the future of domestic agriculture’.