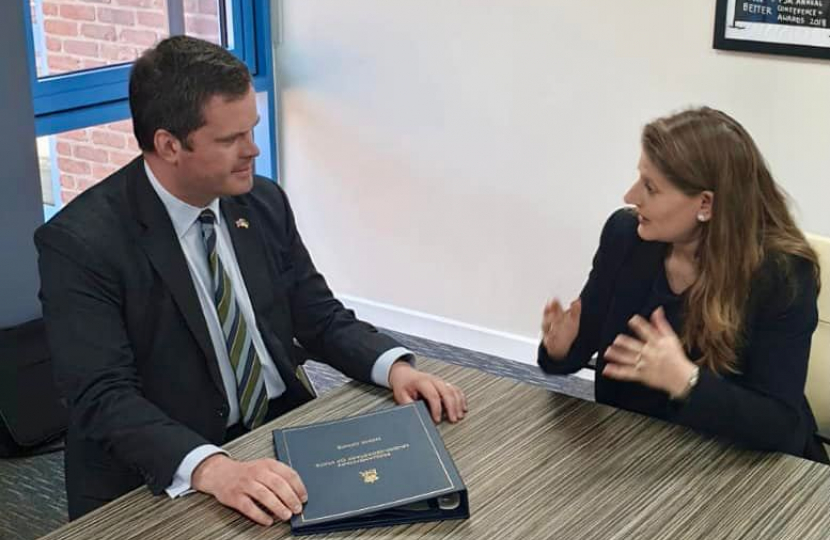 Theo Clarke MP for Stafford recently brought the Minister for Safe and Legal Migration, Kevin Foster MP, to Stafford. Ms Clarke explained to the Minister why she is so strongly opposed to the proposed asylum centre at Beaconside and she raised the high number of objections that she has received from local residents. Ms Clarke spoke with the Minister about why Beaconside is not a suitable location for such a facility.  Ms Clarke has also asked a written question on this matter in Parliament.

'To ask the Secretary of State for the Home Department, if she will reconsider the Government's proposal to relocate approximately 500 single male asylum seekers to Beaconside in Stafford.'

'Due to the unprecedented demand to accommodate asylum seekers who would otherwise be destitute, we have had to use temporary accommodation such as hotels and other large-scale sites to manage demands on the asylum estate. We are committed to working with local authorities to move to a fairer distribution of asylum seekers and bring an end to the use of hotels as contingency accommodation.

The Home Office has therefore announced all local authority areas in England, Scotland and Wales will be expected to participate in a new system of full dispersal to allow us to move away from hotels to less expensive and more suitable accommodation. We have also announced funding of approximately £3,500 per bedspace procured in this financial year to recognise the pressures of accommodating asylum seekers on Local Authority areas.

The Beaconside has been identified as a potential new site for Initial Accommodation as the current site in the West Midlands is due to close shortly. Our accommodation provider, Serco, are proceeding with the consultation on planning and once this is concluded we will convene a Multi-Agency Forum to discuss operations on site. The Multi-Agency forum will be made up of Home Office officials, along with the accommodation provider and representatives from Stafford County Council, the police service, NHS, and Public Health along with others from the voluntary sector. These meetings are an opportunity for all members to discuss any ongoing issues and to share best practice.

Ministers have also met with the Hon Member for Stafford who has expressed her concerns about and opposition to the proposal.'

Theo Clarke MP for Stafford is pleased that 189 police officers have been recruited in Staffordshire since September 2019, bringing the total number of officers up to 1,837.