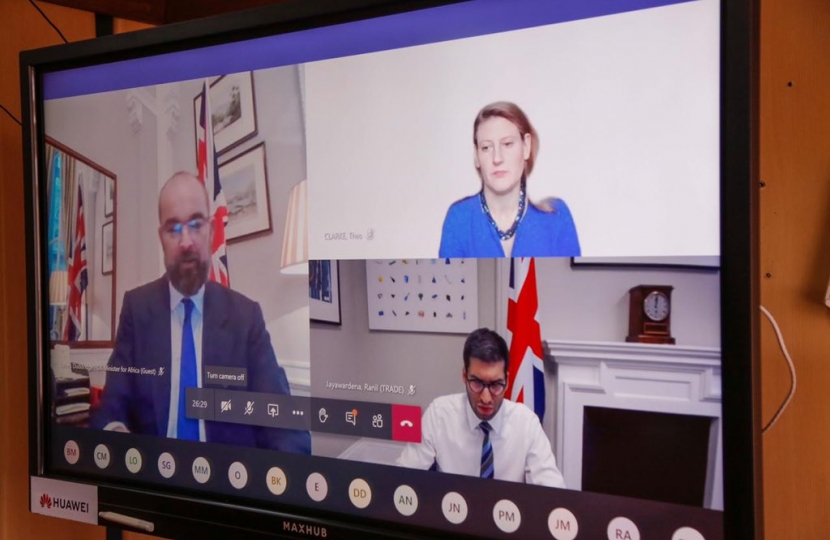 Theo Clarke MP for Stafford and Prime Minister's Trade Envoy to Kenya, welcomes that the UK and Kenya have secured a trade agreement. The UK is already Kenya’s fifth largest export destination. This deal means that Kenyan exporters can trade tariff-free into the UK, including items such as tea and coffee.  This trade agreement also means that British businesses can continue to develop commercial opportunities in Kenya – one of Africa’s leading economies. Following her meetings with Staffordshire County Council and Staffordshire Chamber of Commerce this year, Theo Clarke MP will continue to work with businesses in her Stafford constituency to encourage them to export, particularly following the end of the UK's transition period on 31st December 2020.

The UK has moved a step closer to signing a sixth trade deal in Africa today (3 November), as negotiations on a trade deal are finalised with Kenya. The agreement will ensure all companies operating in Kenya, including British businesses, can continue to benefit from duty-free access as they export products including vegetables and flowers to their customers back in the UK.

Top goods imports to the UK from Kenya in 2019 were in coffee, tea and spices (£121 million), vegetables (£79 million) and live trees and plants, mostly flowers (£54 million). The UK market accounts for 43% of total exports of vegetables from Kenya as well as at least 9% of cut flowers, and this agreement will support Kenyans working in these sectors by maintaining tariff-free market access to the UK. It also guarantees continued market access for UK exporters, who together sold £815m in goods and services to Kenya last year.

As the largest economy in East Africa and among the top 10 across the continent, Kenya is an important trading partner for the UK. This deal also recognises the importance of the wider region - other members of the East African Community trade block are able to join the agreement when they are ready.

I’m delighted we’ve reached a trade agreement with Kenya. This deal gives businesses the certainty that they’ll be able to continue trading as they do now, supporting jobs and livelihoods in both our countries.

I look forward to forging further trade ties with Kenya - the largest economy in the region - and working with other East African countries to agree trade continuity, harnessing free and fair trade to secure shared prosperity for our peoples.

The UK is a champion of liberal free trade and believes in building strong, lasting partnerships in Africa. Our approach delivers mutual benefits and we have a proud record of doing business with integrity.

This trade deal will build on the UK and Kenya’s historic ties and is the perfect springboard to increase our trading in future.