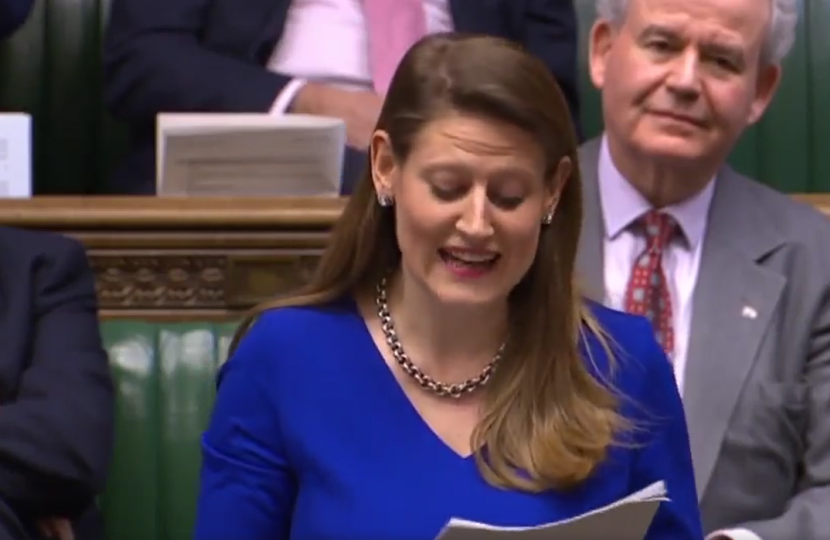 On Monday 13th January Theo Clarke MP delivered her maiden speech in the House of Commons.

During the Queen's Speech debate she began by paying tribute to her predecessor Jeremy Lefroy.  Theo outlined her priorities for the constituency including backing the Armed Forces, creating local jobs, supporting rural communities, fighting for local services including NHS and schools, and getting Brexit done.

Read the full transcript below:

Thank you very much, Madam Deputy Speaker. It is a privilege and an honour to have been elected as the Member of Parliament for Stafford.

As this is my maiden speech, I will start by paying tribute to my predecessor, Jeremy Lefroy, who was an excellent constituency MP. He was a tireless champion of local issues—including our County Hospital, which has been through difficult and tragic times—and he should be commended for fighting hard for local services. He was also a tremendous supporter of local businesses, and I want to thank him for his work in tackling youth unemployment.

I first met Jeremy nearly 10 years ago, when I volunteered with him on the Conservative party’s international social action project in Sierra Leone. During his time in Parliament, he became well known for his expertise in international affairs. He was a committed member of the International Development Committee, and a prominent supporter of the UK’s aid budget. He believed, as I do, in a modern, compassionate form of Conservatism. We believe that the UK should continue to lead in responding to humanitarian disasters and tackling extreme poverty. Having visited Africa with him several times, I have seen at first hand his dedication to promoting the Global Britain agenda and his commitment to eradicating malaria and neglected tropical diseases, causes that I will continue to champion in the House.

I was delighted when Jeremy became the Prime Minister’s trade envoy to Ethiopia. Given that Africa is home to 16% of the world’s population and that figure is set to double by 2050, investing in the economic power of these young people will be key to the success of global Britain, so I welcome the Government’s upcoming Africa investment summit. I wish Jeremy well in his future endeavours, in which I am sure that he will continue to advocate for these important issues.

Stafford is rightly proud of our history. During the Dark Ages it was the centre of the kingdom of Mercia, and local legend has it that the local town of Penkridge was once the capital of England. The Ancient High House, one of the finest Tudor buildings in the country, also welcomed royalty when King Charles I stayed there ​en route to Shrewsbury. May I take this opportunity, during a debate on the Queen’s Speech, to invite Her Majesty to visit us in the constituency, at any time, to continue that fine tradition?

As an English literature graduate, I am delighted that my constituency has such strong literary connections. Charles Dickens stayed at the Swan Inn in the High Street, and Stafford has been home to, among others, the playwright Richard Sheridan and our former Poet Laureate Dame Carol Ann Duffy. I was amused to learn that my predecessor’s ancestor, Thomas Lefroy, was the lost love of Jane Austen, on whom she based her most famous character, Mr Darcy.

Stafford is also fiercely proud of our strong connections with the armed forces. During world war two Stafford hosted multiple bases, including RAF Hixon, which was used to train bomber command units, and flew dangerous night-time raids over Europe to keep us safe and retain the freedoms that we enjoy today. We have one of the largest military bases in the country, with both the Army and the RAF Tactical Supply Wing based in my constituency. I am pleased that the Government have honoured their commitment to NATO by maintaining 2% spending on defence and have retained our nuclear deterrent, and that we will continue to support and strengthen the armed forces covenant. Veterans have risked their lives for our country, so I will always be on the side of our servicemen and women and their families. I am also pleased that this Conservative Government are undertaking the largest integrated security, defence and foreign policy review since the end of the cold war. On Remembrance Sunday I was struck by how many members of the public turned up to line the streets of Stafford in support, so I now pay tribute to everyone at the Beacon barracks for all they do. I take great pride in representing a constituency with such a strong military history.

It is an honour to represent such a beautiful part of the west midlands, including the county town of Staffordshire, and Penkridge and the villages of Acton Trussell, Bednall, Brocton, Hyde Lea, Coppenhall, the Haywoods, Hixon, Hopton, Ingestre, Milford, Tixall, Wheaton Aston, Bishopswood, Seighford, Derrington and many more. I hope to reward the faith that residents have placed in me by working hard over the next Parliament.

My constituency voted to leave so, rightly, my first priority for the people of Stafford is getting Brexit done. In my first week, I delivered on this promise by voting for the European Union (Withdrawal Agreement) Bill. I thank the constituents who lent me their vote at the last election. I will continue to fight for local services, including our County Hospital. I am committed to standing up for our wonderful national health service and in particular to ensuring that we tackle issues relating to mental health. I will also fight to ensure fairer education funding for our local schools in Staffordshire, and I was delighted that Stafford College was recently judged outstanding by Ofsted. I welcome the Prime Minister’s leadership internationally to provide all girls with 12 years of quality education by 2030.

As we forge a new path outside the EU, it is vital that our farmers are supported and that we do not compromise on environmental, food and animal welfare standards in any future trade agreements. We must continue to conserve our countryside and ensure that rural communities get the infrastructure they need, from fast broadband to ​improved local bus services. I have enjoyed visiting our county showground, and I look forward to my first ploughing match in the constituency, although I will need to learn to drive a tractor before then.

Stafford and Penkridge have contributed hugely to the Government’s national agenda to build more houses, which is to be commended. However, when development comes along, we must also ensure that proper infrastructure is put in place. I will continue to raise the concerns of local residents over increased congestion and the provision of local schools and GP surgeries. I am also committed to working with Staffordshire County Council, Stafford Borough Council and South Staffordshire District Council. These authorities have seen great success in delivering services despite ongoing external pressures, and they should be congratulated.

As a former small business owner, I will always bang the drum for businesses to invest in the constituency, support those seeking work and champion our local apprentices. We must maximise the trade benefits afforded to us as part of the Commonwealth. We have to take advantage of the opportunities available to us by leaving the EU in order to achieve a truly global Britain.

I believe that politics is about getting stuff done, both locally and nationally. One of my proudest achievements before being elected was bringing Sir David Attenborough to campaign in Parliament with me, and together we successfully lobbied the Secretary of State to increase funding for tackling plastic pollution. As a one nation Conservative MP, I will continue to champion the environment and the importance of conservation. I welcome the Government’s new Blue Planet fund and I believe that the UK is rightly leading the global fight against climate change through hosting the COP26 in Glasgow. I am reminded of a quotation from the great American President Theodore Roosevelt, who said:

“The nation behaves well if it treats the natural resources as assets which it must turn over to the next generation increased, and not impaired, in value.”

That is a sentiment that I very much agree with.

The Queen’s Speech set out this Government’s ambitious international agenda. As a country that has always been a beacon for freedom and tolerance, the UK should not shirk its global responsibilities. After Brexit, we must continue to bolster our crucial international alliances and institutions, and expand the UK’s diplomatic network.

I am an advocate for gender equality. I would like to thank the cross-party 50:50 Parliament campaign for its tremendous work in encouraging more women to stand for public office. I will always champion the agenda of women and girls and ensure that their voices are heard both at home and abroad. When the suffragettes marched to London through Stafford, they were met with a somewhat frosty reception in my constituency, so it gives me even greater pleasure, 100 years on, to serve alongside a record 220 female MPs in this Parliament and to be elected as the very first female MP for my constituency. Walking through Westminster Hall for the first time as the Member of Parliament for Stafford, I was reminded that beneath my feet was the broom cupboard where the brave suffragette Emily Wilding Davison hid on the night of the census, ensuring that it was recorded that a woman’s place is in the House of Commons.

VAT to be cut for six months for all businesses in the hospitality, accommodation and attractions industries, including up to 410 in Stafford
Public urged to ‘Eat Out to Help Out’ with new voucher scheme to encourage people to support local restaurants throughout August